Sweet Dee and Charlie were found by Happy Cats friend and TNR trapper Carmel. She was helping Roy stabilize his feral colony by getting everyone spayed or neutered. Their mom had brought them to Roy to take care of.

At about 5 months old, these siblings were near the end of their socializing window when they came to Happy Cats. The tabby boy had an upper respiratory infection, so they were recovering in our isolation area (overflowing because of the Black Forest Fire intakes) when Kenny came to visit.

Kenny had been living in a cabin on Canon Avenue when the first Manitou flood hit last July. The rain had stopped when he heard an odd noise that suddenly got louder. He didn’t have time to get out, so he hunkered in. By the time it was over, his house was so damaged it was unsafe to stay. 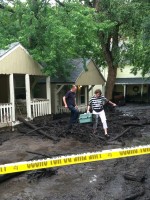 At the same time, one of our foster moms, Ramie, was living a couple houses away. She had left 3 kittens tucked safely in her basement to go on an emergency run to the veterinarian. Stuck in traffic on the highway in the rain, she was panicked, unable to get back. Local Manitou firemen helped her into the house to get the kittens out, but you can see how the flood made all these houses uninhabitable.

Homeless, Kenny evacuated to a motel until he was able to find a new apartment. With the help of friends Andra and Floyd, who had just adopted little Ronzini from us, he was settling into his new place well away from the flood zone. It was time for company.

We were just starting Tabby and Tuxedo on clicker play to help with their shyness. It was love at first sight for Kenny and the kittens. Tuxedo warmed up right away and Tabby just sat and purred. Kenny was able to finish their medication at home and get them well. He named the tuxedo girl Sweet Dee and the tabby boy Charlie.

Sweet Dee and Charlie are still shy with strangers, though getting better. Even social cats are hardwired to be suspicious of strangers in their territory, as they would be in the wild. This is even more true for cats who had to be trapped to be rescued. Grabbing hands followed by scary cages and vet visits are often their first experience with humans, so it’s logical their first response is fear. 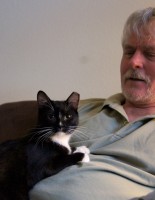 On a recent visit, it didn’t take long for Sweet Dee’s curiosity to win out. With a little coaxing from Kenny, she was soon out and playing. By the time we left, Charlie had made a brief appearance and Dee was relaxed and settled in.

We’re all grateful for Floyd and Andra’s matchmaking skills to help put Kenny and the kittens together, homeless no more!