Samuel â€” Sam â€” bounced from home to home before coming to Happy Cats. He was a beautiful white-patched brown tabby with the size and looks of a Maine Coon. 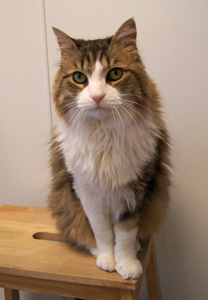 Unfortunately, despite Sam’s beauty and his loving temperament with people, he wasn’t pleased with the other kitties at the shelter. So, Samuel took up residence in a single’s condo and he wasn’t particularly pleased with that arrangement either.

The single’s condo was too small. Sam insisted on spending his days in the small office area with the volunteers. He acquired his own chair with a comfy cat bedâ€”a place for him to stretch out, show off his lovely coat, and supervise all the shelter activities.

Samuel was mostly content to supervise the shelter. But he was also mischievous. Sam frequently snuck into the kitchen to look for treats and bat items off the counters. Occasionally he slipped into the isolation room to steal toys from the new arrivals.

Swats, hisses, and growls were the fate of any volunteer who attempted to stop his exploits. Although, Sam allowed volunteers to bribe him with treats in exchange for his peaceful return to his office chair.

But Sam wasn’t a kitten or a young adult. He was eight years old, and his age made finding a new home with a person to love him hard. He was introduced to many potential adopters, but apparently had high standards. If he didn’t like someone (which was most everybody), he would literally turn his back on them.

Then Sal came to the shelter looking for a cat. Samuel immediately decided his days as an office cat were over. He was going home with Sal.

Now, Samuel supervises homework from Sal’s lap. And he still sneaks into the kitchen to help himself to treats. â€œIn fact,â€ Sal says, â€œin the middle of the night, I caught Sam trying to shred a treat bag to help himself to some vittles.â€