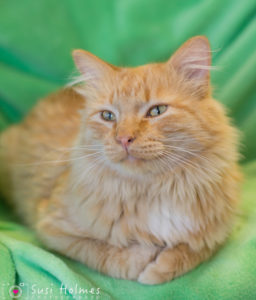 Sonny was abandoned in Rockrimmon when his people moved and left him behind. He managed to avoid the cougars, bobcats and even lynx that live there to be rescued by a kind samaritan. It left him with a pretty severe case of Feline PTSD though, understandably fearful of the things that people could do.

He pushed out the screen at his foster mom’s house when he thought the vacuum was going to eat him. He ripped back the wire in one colony and moved to the one next door to find quieter roommates. He was adopted once and broke through the ceiling when he got scared.

In between all this, he loved to be loved, cuddling on laps and appearing to be the most happy cat in the world.

He won the hearts of his new family when they came to visit and they are being patient with his fears, which are easing. They say,

Sonny is getting braver by the day. He has really taken to my husband who is up at 3:30 am every morning. Sonny is a great destresser for him. Sonny plays really hard with Tim then sits behind the couch up against the window watching the birds.

He sleeps most of the day but comes out around 2:00 to visit us while we home school. At night, he lays in bed with me but prefers to sleep in our mudroom across the hall. We have a special cat bed in there for him along with a second cat box.

He LOVES the Christmas tree. My husband said that in the morning he knocks off all of the ornaments on the lower half of the tree and chases them around. The boys are in charge of brushing him which he tolerates well. I have clipped his nails once so far…It is all about trust.

This is my kids’ first experience with getting a new cat and I told them it would take time…I think he is doing great considering his past.

Thank you for your patience with this loving boy while he works hard to get over his fears!