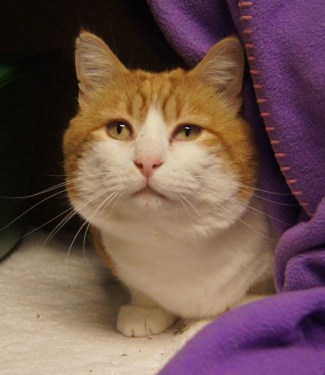 Sandman came to us when his guardian had to downsize and move and couldn’t take him with her. A huge and handsome older guy, he looked just like the Cheshire cat. He had been the king of his castle, in charge of a menagerie of animals, so coming to Happy Cats was a bit of a shock for him. He had a tendency toward love bites and he didn’t do well with the other cats.

Along came Benjamin, an older gentleman himself, looking for that perfect companion. Sandman bit, Benjamin groused, and the deal was sealed.

He is a great companion and we have become close friends. He typically spends his days sleeping, most active at night and simply being happy. When he sleeps at night he likes to snuggle and occupies almost half my bed.

I can assure you that Euslis still has all his claws. I got your message about declawing loud and clear!

Thanks for providing him with temporary shelter and for taking care of him until we got together.