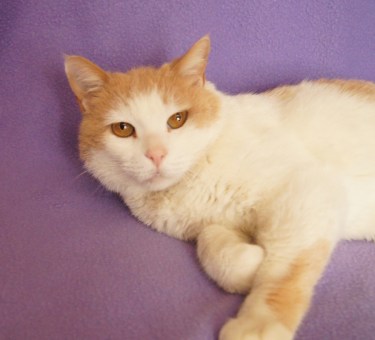 Rio came to Happy Cats after he was found in a downtown feral colony but was obviously not feral by how sweet and friendly he was being.

He was adopted by a para-lympian who was down in Rio for the 2016 Olympic games and was so inspired there that she knew she would name her next pet Rio. She met our Rio when she got back and fell instantly in love! He is now at home with Tammy and Mike and has quickly settled into his new family. He spends his days exploring his new home and his nights cuddling with his new mom and dad! Tammy says he loves being petted and having his head scratched. They love him so much already and he is definitely one very happy cat!