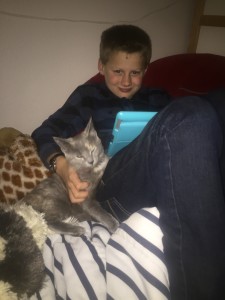 Two months ago we adopted Morgana, who we now call Carly from Happy Cats. She has adjusted well. I was fearful at first of her adapting to our home with a 10-year old boy and an 80-pound Old English Sheepdog. Carly loves them both dearly. She shows our Sheepie Cooper who is boss by attacking him and playing “rug” with him daily. “Rug” is a game where Cooper drags around one of our rugs with Carly riding and going along for fun.

My son Jack and Carly are inseparable. Every night after we all snuggle in bed watching tv when Jack heads off to his own room to go to bed, Carly bolts up off my bed and gallops after him. Carly was supposed to be my cat, but she has claimed Jack as her own. Happy Cats was the most amazing group of people to work with.