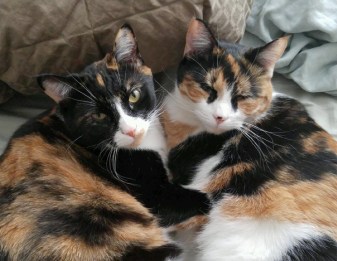 Lucy and Marcie came into Happy Cats with their brother Snoopy and their sister Peppermint Patty, the Peanuts Gang. They were both stunning little calico girls with striking markings, but also the most shy of their litter.

Melissa and her family came in looking for a pair of kittens and of course were taken with these two pretty girls. She had some experience with shy cats, so she thought she would be able to bring them around. But she also had a busy family, so it was risky.

Our Happy Cats volunteers log in thousands of followups per year and we’ve learned that shy kitties who don’t get the handling they need are at risk for becoming the Cats Who Live Under the Bed. In the end, we hoped that Melissa’s cat skills would win out.

Indeed they did. They started out in the perfect place to get to know everyone, the bathroom. There are usually places to hide in a bathroom but not places the cat or kitten can tuck into and never come out.

Melissa went to work using play therapy. Since cats can’t hold both fear and play in their brains at the same time, she made great progress. Still, she was very patient.

Within a few months, her patience paid off. To everyone’s surprise, Marcie, now Luna, became the one who followed Melissa, meowing for pets. Lucy was a cuddler too, just more on her own terms.

Luna is the lap cat now and Lucy, ever the quirky one, really really loves her bags and being carried around in them.

As Melissa says, “I’m so grateful you gave us the opportunity with these girls. We are a more fulfilled family with them!”