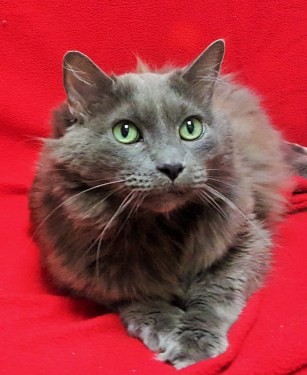 Big silver Evan was the confident, doting uncle to lots of kittens, cats, puppies and dogs over the years. A fluffy Maine Coon mix with amazing green eyes, he came to Happy Cats when his person couldn’t keep him.

But by the time he got to us, he apparently had decided that he really wanted to be the only cat for his next family, telling us in no uncertain terms whenever we tried to put him with even the gentlest of cats. We also made sure he got caught up with a dental.

Along came a family looking for a big, friendly, fluffy cat…no one better than Evan for that! Then we realized they lived in California. As a rule, we don’t usually adopt out further than 4 hours away because the travel stress on most cats can lead to health or behavior issues that have to be overcome at their new home.

However, his people won us over when they said his new Cat Daddy was already in Colorado Springs for a business trip for Google and could fly him back in style, without all the usual stress of plane travel! We figured Evan’s confidence would help him weather the trip.

Evan has landed in a pot of honey with Rebecca and Ian!

We couldn’t be happier with Evan – he has exceeded all of our expectations. And we think he likes us too. 🙂

Your description was no exaggeration – this sweetheart is always up for a cuddle session and a good belly rub. Even after his long ride to California, he seemed happy, comfortable and curious the moment we let him out of his carrier.

It’s hard for Ian and I to remember what life was like before Evan. We’re learning more and more about his personality every day – he has the funniest quirks that we find so endearing. One of our favorites: he runs straight up to us whenever we sing, he’ll meow and sniff around our face like he’s confused by the sounds we’re making.

He also has some very particular preferences, like he’ll only drink from a running water source – like the faucet or, namely, a toilet… (we’ve since bought him a kitty fountain, now his toilet days are over).

Quite possibly the cutest napper we’ve ever seen!

I must admit, we spoil Evan quite a bit. We’ve switched him over to a raw food diet that he seems to love (his coat has gotten so soft and shiny!), we’ve gotten him a walk-in litter box, he claims his own spot in our bed and whenever he rolls on his back, we always stop whatever we’re doing to give him a good belly rub.

Health-wise he is in great shape. We got good feedback after his initial check up and he’s even lost some weight with us! His gums have fully healed and don’t seem to bother him at all. He’s very spritely and we’re in disbelief that he’s a ten year old cat!

Thanks again for giving us the opportunity to give Evan a new home!