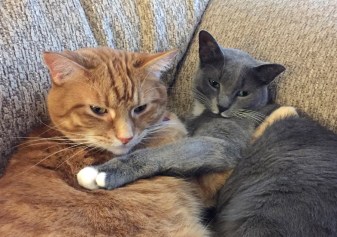 Lady Gray came to us as Little Gray, a cat who had shown up hungry and cold at HCH friend Vickie’s house. After trapping her and putting her through the TNR program (hence her tipped ear), Vickie wanted to see about getting her adopted. But Lady Gray was so terrified that she hissed and struck whenever anyone tried to come near. She was slated for euthanasia when Happy Cats took her in.

She remained defensive until she was placed into foster care. The foster mom used a technique that starts from realizing that the presence of humans is a punishment for a cat this frightened (not “angry” as is so often labeled, but utterly frightened).

To reach a cat like this, you have to reward any positive behavior–a blink, a yawn, a stretch–by leaving. After some time of this, you can build up enough trust to use more conventional gentling techniques, like play and food rewards with a clicker.

As Temple Grandin says, they can’t hold fear and play in their brains at the same time. Lady Gray switched into realizing the foster mom’s presence was a reward, not a punishment. She was then able to start playing and eventually love petting again.

Soon she was back at Happy Cats, a little shy at first, but quickly learning that our volunteers were just as kind as her foster mom.

She made friends with the other cats, the perfect respectful housemate who cuddled and played if the other cats wanted to. She began to come down for visitors and continued to regain her trust, purring, playing and loving being petted.

Then Melissa and her daughter AnnMelissa came to visit. Their cat Ziggy had lost his best friend and they wanted someone else for him…and them. They took a long time to make their decision and finally decided on Lady Gray.

It was the best decision in the world. She was a little scared at first, especially with the carrier where so many other scary things had happened before.

But soon Lady Gray was coming out of her shell and back to being her affectionate self. Then it came time to introduce her to Ziggy.

That didn’t take long either! Ziggy loves to groom other cats, so within minutes, Lady Gray was getting a bath. She must have grown up with other cats because she knew that this was a sign of affection and she was glad to reciprocate.

Soon they were playing and cuddling and having the time of their lives.

Is that not the happiest Happy Cat you’ve ever seen?!

Another thing she must have grown up with was reruns of the television show Friends. Whenever it’s on, Lady Gray comes running to watch it with them! It couldn’t be a better anthem of her blossoming back to herself and her trust for both her people and her new best friend Ziggy. 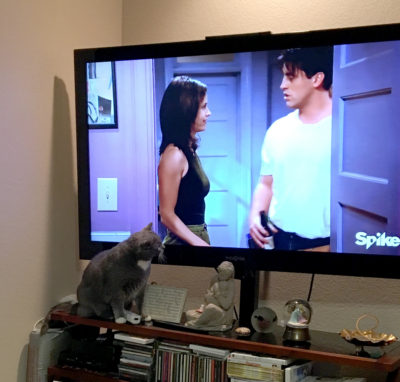 Thank you, Melissa and AnnMelissa, for recognizing what a special kitty Lady Gray is and for giving her just the right forever home! 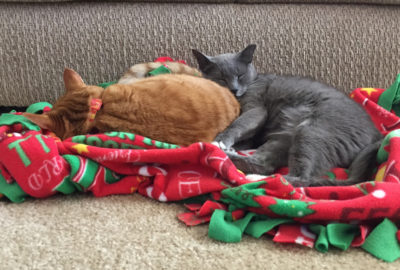