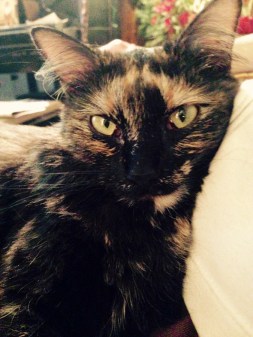 Sweet little tortoiseshell Paonia came in with her kittens, who were already bigger than she was. Like many of our teen moms, she was still in defensive mode from needing to protect her babies on the street. We put her in a condo by herself and hoped for the best.

The best soon came! Ann was looking for a companion kitty and came in with her daughter and niece to meet ours. Paonia came and out curled up on her lap…and that was that.

Ann turned 93 after she adopted Paonia, now Gracie Rose, and celebrated her birthday with a Jefferson Starship concert while Gracie Rose held down the fort! With backup from both her daughter and niece, Gracie Rose is in loving hands, as you can see.