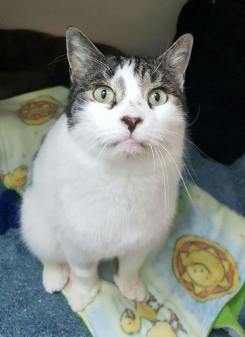 Frank showed up starving at a community cat colony last February, with his white fur all red from a bleeding mouth. We brought him in from the cold and gave him a dental plus some tests for mouth sores.

He was anemic with horrible diarrhea, but we persisted, helping his tummy issues with a wet food diet and giving him lots of TLC. He stayed in a singles condo because of his food, but everyone loved Frankie Five Toes, taking him on walks every day and trying to keep him out of the kibble.

He made fast friends at Chuck & Don’s Pet Food & Supplies when he was there too, taking over their Castle Rock back room after hours. He didn’t do well at his adopted home and was returned, but maybe there was a reason.

Last week, we got an email from a family who thought we had their cat. They sent us this screenshot photo and we knew immediately we did!

Frank was Mana, which means Power in Hawaiian, and had been raised by the Sharpe family from a kitten with his brother. They had moved to Colorado Springs last year and had lost him in the move.

When they came in, dad Stephen picked him up and Mana buried his head in his arms. The kids couldn’t believe they had their cat back after all these months.

We can only imagine that Mana also held out hope while trying to survive outside that his family would come back for him. Aloha to our Frank and best wishes for your new/old life as Mana again!