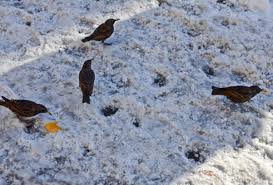 The weather was awfulâ€”cold, the temperature sinking below zero, and frostyâ€”when Happy Cats’ friend and volunteer Sue stopped at a 7-Eleven gas station. Sue spotted a skinny, brown tabby trying to catch a bird as she filled her car with gas.

The tabby’s hipbones were plainly visible, and he was too weak to catch the bird pecking at pieces of trash. Sue went inside to ask about him and was told he’d been hanging around for a while. When she came back out, he was gone. She followed his tracks in the snow back to a mold-eaten couch.

Buster’s people had moved, throwing out everything they didn’t need. Including Buster. There was a hole between the cushions where the tabby curled up, hoping to ward off the cold, holding onto the last remains of his family.

Sue approached the cat, and somehow got him into her car. She brought him to Happy Cats, and a volunteer took him home. Barb, his foster mom, nursed him back to health and named him Buster. As Buster put on weight, it became apparent that he was pretty brown tabby with a white mask, bib, and socks.

He was also a very loving and mellow cat.

Buster came back to the shelter, healthy and fully recovered, and settled into a colony. He loved playing with the kittens and all the toys, even letting people do silly things with pipe cleaners.

But he didn’t stay at Happy Cats for long. A family came in, looking for a sweet and easygoing cat, and Buster was the perfect fit.

His family says, â€œBuster’s doing great! He recently made the move to a new house, with plenty of room to explore and windows he can see out of. He’s a joy to have in our home (and he loves to eat). We are glad to have gotten him from Happy Cats.â€