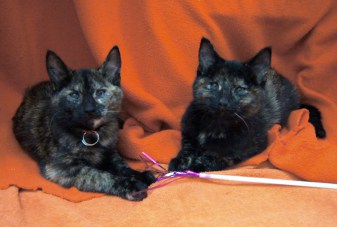 Happy Cats took in 5 kittens from an outside situation when they became orphaned. It soon became clear that two of the kittens, beautiful little tortie girls we named Princesses Louisa and Christina, had impaired sight.

They were fostered by a nice family and brought into the haven. We had them checked and it appeared they were born with this condition. They could both could see a little, at least light and shadow. They still loved to play like normal kittens, especially with toys they could hear. It took several months, but they finally found their home with a nice young woman who loved them dearly, renaming them Bee and Rumer.

Unfortunately, she became engaged to someone who was allergic to them, so back they came. We always want to be the ones to find new homes for kitties whom we have cared for and were glad to do this for them.

Unofficially known as The Ladies, they lived with us in our office. Bee sees more than Rumer, but both can see well enough to follow a laser light to play…and play they did! They made fast friends with the volunteers who cared especially for them.

Again, they waited patiently, and again, their special person came along. They were a little scared at first, but Anna gave them their safe room so they could bond to her and their new place before getting lost in the rest of the house. This is important for all cats but was especially important that these ladies knew they had a new place where they were safe and loved.

They quickly adapted to their new love, running up to Anna when she entered the room. She let them out to explore and says, “They are significantly less jumpy now and have learned that the kitchen is where all the good stuff is. So whenever I go in there…. I am sure to have a tail. Since I spend a lot of time at the computer, they also curl up around my feet under the desk. They love to relax on their new favorite spot…their cat tree!”

Thank you, Anna, for having a heart big enough for these two special ladies!